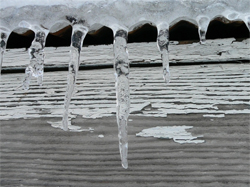 The old "no one is going to buy a Metro Atlanta home in the winter" philosophy is gone. At least among serious home buyers it is.

January can be a great time to buy a Metro Atlanta home, and here's why:

Mortgage rates are low now, although they are higher than they were six months ago, and higher than they were last March, but may be lower than they will be this Spring. The price increases that were common this past Spring and Summer are slowing. Even the Metro Atlanta area is showing signs of cooling, and we're not talking about the weather here.

There isn't a lot of competition. Most deals were wrapped up before Christmas, or people put off looking until after the New Year. There are still homes on the market, but not as many people gunning for them. This is an advantage to buyers.

To buy a Metro Atlanta home during the winter can be to your advantage too because most of the home's big systems are put to the test. Heating, plumbing, roof and gutters are all being tested by the weather.

Granted, some of the curb appeal may be missing because grass is not as green and flowers are not in bloom, but fixing up landscaping is a lot less expensive than finding out next winter that your heat doesn't work because you bought when no heat was being used in the Spring or Summer.

Investors are, for the most part, usually not buying homes during the winter months, meaning you'll have less competition to buy a Metro Atlanta home now as opposed to waiting until warmer weather.

Another factor when considering whether winter is the best time to buy a Metro Atlanta home is the "Housing Affordability Factor". This takes into account the median price of a single-family home, median family income and interest rates to gauge whether it's a good time to buy. Numbers over 100 indicate that the average American family should be able to afford a purchase, and in May 2013—the most recent data available—the Index showed 172.7, about the same measurement as affordability in 2010 (not considered a particularly impressive year) and a drop from last May's 188.4. While favorable, the current market wasn't exactly considered ideal then.

So if you've been considering buying a home but thought winter might not be the best time, think again. Winter is a great time to buy a Metro Atlanta home. Call us, we'll explain even more reasons why you should get started now.