The question on everyone's mind who has even been remotely thinking about buying a home is, "are Metro Atlanta mortgage rates still headed higher?"

All indications are, not for the time being.

When the Federal Reserve surprised everyone when it announced it would not start tapering its purchase of mortgage-backed securities and Treasure bonds, it basically said to prospective buyers who have been shying away from buying a home, to start shopping again. 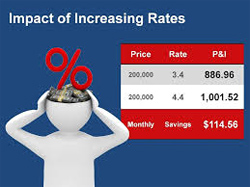 Metro Atlanta mortgage rates have risen significantly amid concerns that the Fed would cut back on its $85 billion a month bond-buying program. Rates on a 30-year fixed mortgage have been hovering around 4.5%, up from 3.35% in early May. That rate increase has meant an extra $132 a month in payments for a Metro Atlanta area homebuyer with a $200,000 30-year loan.

But now that the Fed has said it will continue to purchase the bonds, rates will likely retrace some of those gains and we expect to see some drops in the coming weeks. We don't expect anything drastic, just a slight decline in the next few weeks.

The day after the Fed announcement, 30-year Metro Atlanta mortgage rates fell from around 4.57 percent to 4.5 percent.

Freddie Mac's chief economist, Frank Nothaft, said rates were reacting to the same economic trends that influenced the Fed's decision. Among them: slowing growth in retail sales and industrial production and the lowest reading in consumer sentiment since April. He also noted tighter financial conditions, including the sharp increase in Metro Atlanta mortgage rates in recent months.

Should the economy gain more momentum, however, fears that the Fed will taper off its bond purchases will most certainly resurface and rates will move higher again.

Despite recent increases, Metro Atlanta mortgage rates are still low by historical standards. During the housing boom years, they typically ranged between 6% and 7%. Higher rates should also prompt some banks to ease up on their lending standards, helping more people to buy homes.

It is believed that rates will be slightly higher in 2014, but not enough to derail the housing market recovery.

By now, unless you've been living in a closet for the past few weeks, you already know that mortgage rates have been inching up.

If history is any indication, the recent spike in mortgage rates is going to have little to no impact on home prices, according to a new report from Fannie Mae.

Whether you're planning to buy or sell a Metro Atlanta home, here's what you need to know about rising mortgage rates. 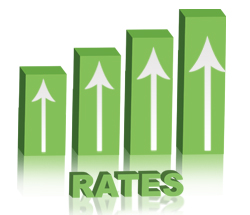 If the economy continues to improve as anticipated, mortgage rates will keep inching up. We're not expecting to see rates climb back above 5 or 6 percent again until at least 2014, but with mortgage rates, a lot of things factor in to set the rates. But even at 5 percent, historically speaking, rates are still pretty cheap. Anyone remember the days of 21 percent mortgages?

Mortgage rates would have to rise fairly sharply to make a dent in the Metro Atlanta housing market. With prices rising, sellers can be patient. For buyers, as we said, mortgages are still historically cheap.

Be Ready To Lock In Your Rate

To avoid any short-term spikes, it is recommended that you lock in as soon as you can (typically when you sign a contract to buy a Metro Atlanta home).

Most lenders won't charge for a 45-or 60-day rate lock. Pay for a 90- or 120-day lock only if you think your deal may take a while to close. The typical cost is a quarter of a point per 30 days. With a float-down option, you'll pay less when rates fall at least a quarter point. Skip that add-on unless it's free.

You may be eyeing adjustables, which are up less than fixed rate loans. An ARM is the better call only if you plan to own your Metro Atlanta home for a short time.

When we sit down and discuss your Metro Atlanta home buying options, we'll go over mortgage rates with you and help you decide which type of loan is right for your particular situation. We can also help you find a mortgage expert in the Metro Atlanta area to discuss your options with as well.

Mortgage rates are on the rise, and home buyers are trying to get in before they go higher. In the Metro Atlanta area, rising mortgage rates and low inventory are combining to drive up prices and turn things into a seller's market. CBS's Anthony Mason reports…

Potential Metro Atlanta home buyers need to be vigilant in their home search, but also need to remember not to fall in love with any home before you own it, or you just might end up paying more for the home than it's worth.

Using an Exclusive Buyer's Broker like Home Hunters Realty is the only way you can be sure of getting the best possible deal on any Metro Atlanta area real estate.

The days of record low Metro Atlanta mortgage rates have apparently come to an end as fixed-mortgage rates hover around 4%. And while there are many saying that rising rates won't hurt the housing market, others are more concerned.

Many analysts seem to agree that if Metro Atlanta mortgage rates rise much more above where they are now, affordability could begin to take a toll. This is especially true with first time home buyers and investors, which combined, make up a large part of the home buying market these days.

Fannie Mae Chief Economist Doug Duncan said the concern should be less about what the rates have risen to and more about the speed at which they are rising.

Duncan noted that in 1994, for instance, rates rose 2% over a 12-month period, resulting in a huge impact on home prices, which fell significantly.

"If the rise happens rapidly, it tends to have an impact," said Duncan, who added that once Metro Atlanta mortgage rates rise 100 basis points, home sales may begin to slow.

As far as first-time homebuyers go, Duncan said it all depends on how high the mortgage costs go. "It's all about the size of the mortgage that they're going to try to take on relative to their financial strength," said Duncan.

Overall, first-time homebuyers are making up about 30% of total buyers, said Duncan.

High investor activity is making up the difference, he added. "If investors fell off, would first-time buyers be bigger?" asked Duncan.

A lot lies on that very important "if," according to Duncan. If investors start to back out, you'll likely see prices flatten out.

"We do believe there is going to be a slow down," said Duncan.

But Duncan added, "We're not up to the average long run mortgage rate that the economy has seen over all those years." From World War II to today, the average 30-year fixed-rate mortgage is about 6.5%, according to Duncan, who noted, "People have forgotten that there were mortgage rates at the 14% and 15% range for awhile."

Metro Atlanta housing is facing what some financial experts call "very concerning circumstances" when it comes to rising mortgage rates.

Peter Tchir of TF Market Advisors, a New York research, asset management, and consulting firm, puts it quite simply, "Rising rates are bad, particularly bad when it comes to one of the bright spots for the U.S. economy: housing."

Recent increases in mortgage rates adds roughly $90 to $100 onto the monthly mortgage payment for the typical $250,000 house. Rates for a 30-year fixed mortgage tend to track the 10-year Treasury rate very closely. Yields on the 10-year Treasury note hit their highest level in more than a year recently.

Although rates remain very low based on historical standards, Tchir thinks this is significant headwind for potential buyers who have been on the fence. And he counts a lot of people in that category given the lack of growth in high paying jobs during the economic recovery. Tchir points out much of the job growth post-recession has come from lower paying, service-oriented industries or in temporary services.

As for housing, mortgage applications (particularly for refinancing) have dropped in recent weeks. Tchir thinks we could see a real slowdown exacerbated if and when the Federal Reserve begins to taper its bond-buying program, which would remove support for Metro Atlanta housing.

So even though rates for buying Metro Atlanta housing is on the rise, it's still a lot cheaper than renting. Contact us today for current rates and available inventory of homes for sale.